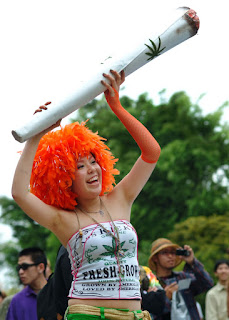 In a victory for stoners in California, the California Supreme Court struck down laws passed by the state legislature that limited the amount of medical marijuana one can legally possess in the state. In 1996 California voters passed a ballot initiative allowing the use of medical marijuana. The state legislature later placed limits on how much drug one can hold. The maximum a person can possess was decreed as 8 oz. of dried mj and grow no more than 6 mature or 12 immature plants.

The Supreme Court ruled that the medical marijuana initiative that became part of the state Constitution never placed a limit on how much drug one can have. So now if somebody has a doctor's excuse, he can have as much marijuana in California as is "reasonably necessary."

Of course it is ridiculously easy to obtain a doctor's prescription for medical marijuana in California. I've written before how a doctor can moonlight as a medical marijuana prescription dispenser and make mucho bucks, all in cash. You don't even need to be certified in marijuana expertise because, well, there is no such thing. I know of no medical school in this country that even teaches a course on medical marijuana. So next time you visit California, don't be surprised if you see a bunch of bleary-eyed people driving around searching for White Castle.
Posted by ZMD at 8:00 AM