Dude, are you working out? 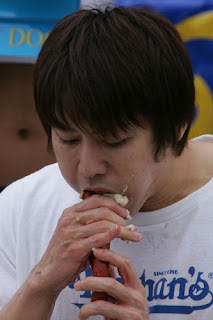 I walked into the operating room to see if my colleague needed a break after a long night on call. I hadn't seen him in about a month and I was immediately struck by how BLOATED he looked. His scrub shirt looked like he was hiding the Incredible Hulk underneath. His neck seemed to have gained four inches in circumference. I asked him the polite way of asking somebody if they've been gaining weight, "Dude, have you been working out?" He said no. He does have a home gym in his garage but basically what he has been doing finally is eating on the job. He said he was tired of feeling cold, hungry, and dehydrated all the time in the OR.

We have a large number of anesthesiologists in our group, over fifty. There is just no way to give everyone fifteen minutes for a lunch and pee break. So each person is on his own. My friend began to worry about his health. While the nurses give each other breaks (it's in their nice little contracts) and the surgeons can leave anytime during a case to go to the bathroom, anesthesiologists are stuck in the OR all day or in too much of a hurry to get their next case started to give a break to themselves. This has led to several anesthesiologists here getting kidney stones, some requiring surgery. Some have nearly passed out and needed an IV bolus to keep going.

I was on call a few weeks ago and I worked nonstop from morning until the following morning after 2:00 AM, with no breaks in between cases. As soon as one case was finishing, the OR scheduler would page me and tell me to go set up another room as the surgeon was here and the patient was ready in preop, just waiting for me to get the case started. It went on like this for nearly eighteen hours straight. This is the reason many anesthesiologist will bring a snack into the operating room, usually something discreet like a power bar and bottled water. It's not like we're bringing in take out from McDonald's but we do need to rehydrate ourselves. And everybody in the OR knows this. I've never been reprimanded for snacking in the operating room. The nurses sympathize with our plight and the surgeons know that anesthesiologists snacking in the room allows for quicker turnover as no lunch break is needed between cases.

So despite the fact that JCAHO highly frowns on eating in the OR, we stealthily munch away behind the drapes. My friend realized that nobody was going to look out for his well being in the operating room. He now brings fruits and other snacks with him to work. He has gained twenty pounds since he had this revelation. And he feels 100% better.
Posted by ZMD at 9:00 AM