Christmas, The Most Envious Time Of The Year

Christmas is almost here and Santa has come early for...the surgeons. Yes it's that time of the year when the surgeons flaunt all the gifts they receive from their patients while the anesthesiologists get bupkes. It annoys the heck out of me to see them brag about the presents from patients who are grateful their surgeons "saved" their lives while the party actually responsible f

or keeping them alive through the procedure gets to share a muffin basket with the rest of the "staff".

The surgeons are clueless about the resentment they cause their anesthesia colleagues. One guy went into great details about the $200 per person sushi dinner he received in Beverly Hills. Another one bragged about the dinner he ate at a private mansion, catered by the staff of one of Wolfgang Puck's restaurants. He said the paintings in the house were "exquisite". You'd think the person who made the procedure tolerable for the patient would get an invitation too. Maybe the anesthesia was too good; th

ey forgot all about the person administering the anesthesia. We got a box of cupcakes instead. Gourmet cupcakes, but cupcakes nevertheless.

They receive boxes after boxes of $300 bottles of alcohol, clothing from Nordstrom's or Neiman Marcus. One person said he received such a huge tower of Harry & David's goodies that he can't finish it all at home. Well, I thought, you could at least bring it to the hospital to share with e 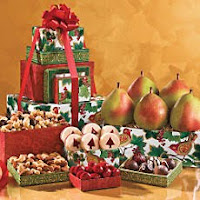 verybody. After all, there was more than one person in the room when the procedure was underway.

The only time they've shared with anesthesiologists, and the staff, is when they receive cheap See's chocolates or unwanted gifts. The nicest gift I ever got was when the surgeon received, another, Nordstrom's tie and he didn't want it so he gave it to me. Gee thanks a lot. I'll just put this next to the 50 other ties I never wear. When does an anesthesiologist ever wear a tie?

Some people say that the anesthesiologist not being acknowledged is the greatest complement to us. You can bet if there was a problem with anesthesia, you know something like recall, lost airway, or cardiac arrest, they would remember us very well. There would be no sushi dinner on Rodeo Drive for Christmas, more likely a piece of paper with a lawsuit on it. So enjoy that last red velvet cupcake. Sometimes it's better not to be remembered than to be remembered at all.
Posted by ZMD at 9:35 AM

Email ThisBlogThis!Share to TwitterShare to FacebookShare to Pinterest
Labels: Christmas