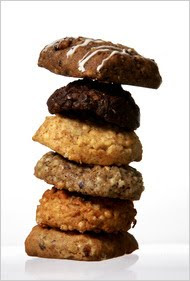 I bumped into a colleague the other day who I hadn't seen in a few months. I complimented him on how good he looks. I asked if he had lost some weight, which obviously he had. He said he had lost 26 pounds in the last eight weeks. Wow, I said. That's great. What is your secret? Exercise, Atkins, Miami Beach? No he replied. He's been on the cookie diet. Gee, I thought to myself. Maybe I should try that too.

As some of you long term readers may remember, I recently restarted my exercise program. I've been going to the gym about twice a week now for about eight weeks and I have actually gained weight. While twice a week doesn't sound like much, it is 200% more often than I was going before. I accept that fact that I always gain a little weight when I start exercising again, hopefully due to the buildup of muscle mass, ha ha.

But this time I think I'm just not as disciplined on the diet side. With two small kids around and a good wife who makes great homemade meals, there is always food lying around the house. Thus it can get deadly when I get home late from work, starving so much that I could eat my own foot, and there are leftovers and junk food within easy grasp. The late hours also aren't conducive to a regular exercise routine. Therefore I snarf down my late dinner, put the kids to bed if they're still up, then collapse in bed to get ready to leave the house by 6:00 AM the next day. On weekends, the trips to the kids' favorite restaurant, Home Town Buffet, certainly don't help either. (I'm partial to their fried chicken, steak, and pasta with alfredo sauce.)

So this cookie diet sounds very tempting. Basically you consume less than 1000 calories a day. With that kind of intake, I think anyone can lose weight. The tricky part is weaning off the diet back to normal foods. That has always been my downfall. I'm trying to swear off any more fad diets and unsustainable diets. So I'll continue for now to exercise. Though I'm not losing weight, I feel better about myself after I come back from the gym and hope that I get some cardiovascular benefits out of it.
Posted by ZMD at 11:51 AM