My iphone, seduced by the dark side 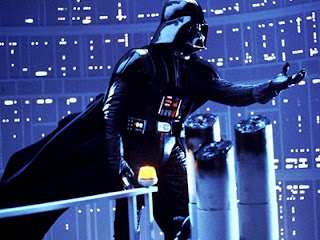 Sorry I haven't posted in quite some time. I'm being initiated into a cult. I consider its insidiousness right up there with Scientology and the Theory of Global Warming. Of course I'm talking about my new Apple iphone (or iPhone?). I couldn't stand it anymore. I watched day after day as legions of residents and attendings stand like zombies in the hospital hallways and elevators, flicking their fingers over that seductive glass surface, completely oblivious to the patient gurney about to run over them. At meetings, everybody is furtively glancing down at their iphones, trying to be inconspicuous in their contempt of the speaker and his topic at hand. It all reminds me, ironically of Apples infamous 1984 commercial. Except this time the face of the Supreme Leader on the screen is Steve Jobs and as yet there is no pretty blond lady to smash the spell the Leader is casting over his lemmings.
I tried to console myself by stating the obvious; there are millions of dollars worth of computer monitors all over the hospital. All I need out of my cell phone is a phone. I don't need no freaking internet browser, music player, compass, GPS navigator, gazillions of apps, etc. in my pocket. Why do I need to pay a mandatory extra $30/month for a data plan and even more money for simple text messaging? Why doesn't an unlimited data plan cover texting also? But my cell phone was over two years old and starting to do funny things, like rebooting itself in the middle of a conversation. Plus my wife freaked when she found out her phone had above average radiation emission and wanted a new phone. So my decision came down to two phones, get a Blackberry with its higher learning curve and radiation exposure or succumb to the dark side.
To the dark side did I befall.
So far, it has been...okay. When I downloaded itunes (iTunes?) for the first time, it promptly reconfigured my entire music collection from WMA to AAC, which believe it or not took about 20 hours. I had to tell everybody in the house not to touch the computer during that time, just in case somebody forgets and accidentally turns it off. What can I say, I have a huge music collection on my computer. So now I have two sets of files for each song on my hard drive. The iphone has an annoying safety feature where I have to type in a Passcode to unlock the phone so I can make a simple phone call. It's nice in case my phone ever gets stolen but downright dangerous when I'm trying to call somebody while driving in rush hour traffic. Remember the iphone has no keyboard so my finger is just kind of hovering over where I think the keys should be to type my password while trying to maneuver in urban traffic. My final criticism that I'll bring up here, though by no means the last criticism of the iphone, is that the apps are WAY overrated. There is an entire category devoted to the medical field but the anesthesia subcategory is woeful. There are a few anesthesia handbooks for downloading. But rather than flicking through my phone, wasting battery life, it would be much easier for me to carry a copy of an anesthesia handbook for referral. As far as games are concerned, who has time for games? Certainly not at work. And I've got plenty on my plate at home to have time for games.

So that's what I've been doing with all my free time in the last week. The exercise program has taken a temporary break for now (but also because I came down with a cold but that's another blog entry for later). I've got the iphone functionally just about where I want it. My wife's days and nights of being an iphone widow is almost over. And I can start blogging again about the crucial health care reform votes that are coming up along with how they are going to continue to screw the medical and anesthesia professions.
Posted by ZMD at 11:50 PM

Email ThisBlogThis!Share to TwitterShare to FacebookShare to Pinterest
Labels: My iphone, Seduced by the dark side