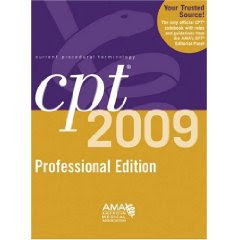 The current issue of Anesthesiology News reports that some people believe there is a more sinister reason the American Medical Association so quickly endorsed the passage of the House health care reform bill (H.R. 3200) despite many doctors' misgivings. AMA president J. James Rohack, MD has publicly stated that the organization's stance on health care reform is to provide "health coverage for all Americans as well as providing stability and security for Americans that currently are insured, including Medicare patients." But to some doctors who are opposed to the public option provision in the reform bill, there is another reason for the AMA's approval. That would of course be money.

The current health care reform bills all preserve the use of CPT codes in physician billings. CPT (Current Procedural Terminology) codes are published annually by the AMA. These codes correspond to every service and procedure performed by physicians. They must be accurately filled into insurance forms for proper reimbursement. Any deviation could potentially limit insurace payments or even result in outright denial. Because the AMA owns the copyright to the CPT, they receive millions of dollars from its publication each year.

According to the AMA's web site, a 17 member CPT Editorial Panel meets 3 times a year to consider updates and changes to the CPT. If a doctor wishes to get paid properly, he/she is forced to buy the new version each year. But that's not all. Because the CPT is so complicated and the changes each year may be very minute, the AMA also sells (from its web site) "CPT® Assistant, a monthly newsletter, CPT® Changes: An Insider's View, an annual publication explaining the intent and use of new/revised procedures/services, CPT® Principles of Coding, an educational primer covering the basic concepts of CPT® coding, CPT® Network, an online service that provides users with expert advice on code use, and an annual CPT® coding symposium." Even the AMA acknowledges how complicated the CPT codes are, but they are willing to help you out, for a price.

So does the AMA really have patients' and doctors' best interests at heart? With only 15% of active physicians among its members, can the AMA legitimately claim to speak for the country's medical interests? Why has the AMA failed to address the concerns of many doctors about the dangers of a public option in health insurance, instead rushing to endorse reform bills vilified by a majority of the population and most doctors? Can the AMA ever attain the clout with physicians that it once did? Can doctors ever regain influence with Congress if they keep splintering into smaller subspecialty groups while the lawyers stand together under the ABA? The passage or failure of health care reform will tell the answer.
Posted by ZMD at 11:23 PM