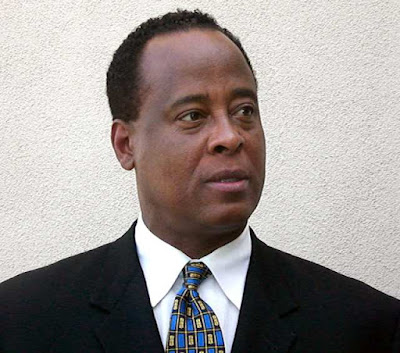 The LA County coroner's office has ruled Michael Jackson's death a homicide. Surprise, surprise. According to the LA Times, the coroner's office said "lethal levels" of propofol was found in MJ's system which led to his death. Dr. Conrad Murray told the police he usually gave 50 mg of propofol every night to help MJ sleep but on the morning of his death, he only gave 25 mg after valium, ativan, versed, and "various drugs" failed to help his insomnia. After MJ went to sleep at 11:00 am, Dr. Murray went to the bathroom. When he got back, MJ wasn't breathing so he started CPR. At one point he went downstairs to the kitchen and sent Prince Michael upstairs to his dad's room.

There are so many holes in this story it's hard to find the truth among all the fiction. First of all, I don't know what a "lethal level" of propofol would be. Certainly 25 mg is miniscule and I've hardly ever seen anyone fall asleep with that small amount, unless they were 90 years old. Of course Michael had a ton of other drugs on board which would synergistically enhance the effects of propofol. The police confiscated a whole pharmacy of sedatives from Dr. Murray, including valium, tamsulosin, lorazepam, temazepam, clonazepam, trazodone and tizanidine. But Dr. Murray should have known that and not leave Michael alone at any time. Plus 25-50 mg boluses of propofol would put you to sleep for a few minutes only. Dr. Murray says MJ received 50 mg nightly to help him sleep. Unless propofol was given as a drip, that would not help him sleep through the entire night. The police say they found no evidence that Dr. Murray ever prescribed or purchased propofol but propofol was found in his personal belongings. So where did the doctor obtain his supply? Somebody besides Dr. Murray is going to get into a heap of trouble here.

Dr. Murray said he performed CPR until the paramedics arrived. But he already said he stopped CPR to go downstairs to talk with security and sent MJ's son to the room. The police have cell phone records that show the doctor was talking for 47 minutes after 11:18 am. Who was he talking to while MJ died? Who was doing CPR while he was talking on his cell? Why would he stop CPR to go downstairs? And why would he send MJ's 12 year old son to his dead father's bedside?! This is beyond comprehension.

In the article, there are two versions of what happened after MJ fell asleep. One part said Dr. Murray went to the bathroom and came back to find MJ apneic. Another section said he was on his phone talking to his Houston office when he came back and found him apneic. I imagine it was probably a little of both. He went to the bathroom first (get a TURP or some laxatives doc) and started talking on his cell, as the 47 minutes on his phone records would indicate. Who knows how long MJ was dead by then.
Posted by ZMD at 2:17 PM

Email ThisBlogThis!Share to TwitterShare to FacebookShare to Pinterest
Labels: HOMICIDE