Anesthesiologists are scientists too

What an amazing week this has been for science, and astronomy in particular. First we celebrated the 40th anniversary of the first manned lunar landing. Then there was the longest solar eclipse of this century over India and China yesterday. And late in the day was the amazing discovery by Australian amateur astronomer Anthony Wesley of a collision between Jupiter and a large space object, likely a comet or asteroid, producing a big black spot in the atmosphere.
What does all this have to do with anesthesiology? Well, we anesthesiologists are scientists too. We are not just "gasmen", "tube passers", or just "anesthesia". (That is one of my personal pet peeves, to be addressed as "are you anesthesia?" Anesthesia is a sensory state, not a profession or title. You never hear a nurse or resident ask a surgeon "are you the blade?" or "are you the skin cutter?") We all studied very hard in the sciences to get to where we are. And I bet most of us loved science as kids. You would not mistaken anesthesiology nerds for the jock orthopedic surgeons whose arms are the size of their heads.
I grew up watching all the science shows: Nova, Nature, Wild Kingdom. I saw every episode of Carl Sagan's "Cosmos" twice. I was so engaged and infatuated by that show that my best friend thought I was in the cult of Carl Sagan. I'll never forget the first time I looked at Saturn through a friend's telescope. The rings were even more spectacular than any of the books that I had read. It wasn't until much later that I bought my own telescope. And boy is it a good one, a Meade 8" Schmidt-Cassegrain. It weighs about 50 pounds in its case and that doesn't include the stand or the wedge. And everything was controlled manually, not like today's fancy computer guided scopes.
But as our jobs and lives get more hectic, the opportunity to indulge in our pas 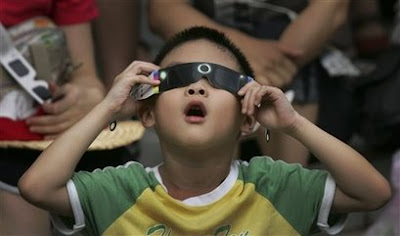 sions becomes more remote. That precious telescope has been stowed in the closet for years now. Last time I took it out was to watch Earth's close encounter with Mars a few years ago. Some of the neighborhood kids came out to watch. They were in awe of the Martian ice cap and the green and red blotches on the surface (alas no canals). I like to think that I instilled the love of science into at least a few of them. And in a few years, when my own children are older, I can share with them the joys of science and discovery that I made all those years ago.
Posted by ZMD at 1:02 AM