With all the talk about significant events in space recently, I thought I'd look into some of the research into space medicine and anesthesia. There is a large body of work studying surgery in a zero gravity environment. As human space flight lasts into months and years duration, inevitably a traumatic event will occur and surgery will have to be performed in outer space to resuscitate the patient.

I didn't know this, but surgery has been performed in space on animals. If you do a Google search, you will see a list of interesting journal articles. Did you know bleeding isn't really a big problem in zero gravity surgeries? The high surface tension of blood keeps them clumped to the surface of the wound. Only arterial bleeding can cause drops of blood to float away from the body. So just like earth-bound surgeries, avoid arterial bleeding. Laparoscopy apparently isn't a problem in space either. It was feared that bowel and other organs would float inside the abdominal cavity, obscuring the surgeon's view. Apparently the mesentery keeps everything tethered down so laparoscopy can be performed. 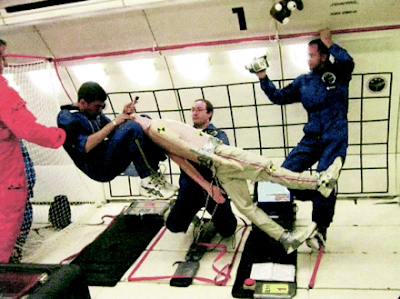 But what about anesthesia specific research? Our number one priority in anesthesia, airway management, has been extensively researched. Most of the studies involve mannequins in a parabolic flight pattern that yields about 23 seconds of weightlessness, more than enough time to intubate a patient. Bag masking a patient is not a problem. A study comparing intubating with an endotracheal tube vs. a combitube showed a slight increase in speed with the combitube, but this was performed by non-anesthesiologists. But the most interesting aspect about intubating a patient in weightlessness is shown in this picture. The anesthesiologist would hold the patient's head between the knees so that the patient doesn't float away during laryngoscopy. I would think this will limit the number of anethesiologists who can work in outer space; flexibility is not a trait among many anesthesiologists I know. I better go to the gym to work on my thigh adductors if I want to work in space.
Posted by ZMD at 3:29 PM

Email ThisBlogThis!Share to TwitterShare to FacebookShare to Pinterest
Labels: Anesthesia in space and zero gravity